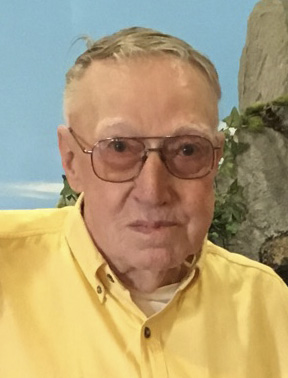 One of God's Best Fishermen was taken to heaven on July 14th, 2018. Donald Gordon Sundblad, age 85, was born to Helmer and Hilda Sundblad in their rural home in Erhard, MN. Don passed away at the Battle Lake Good Samaritan Center after a courageous battle with cancer.

Don was a member of Grace Lutheran Church in Erhard and was confirmed at Bagstevold Lutheran Church in Erhard. Don married Helen Alberta Poitra on October 23, 1953. Soon after, Don joined the Air Force, at age 21, and was stationed in Denver, Colorado. Their first son, Steve, was born on base. This union also bore 3 more children, Vicki, Randy and Sandy. Following his Honorable Discharge, after 4 years of service, they moved to rural life in Erhard, MN, where they spent many happy years.

After his military service, Don worked for Wright Tree Service before attaining a job at the Fergus Falls State Hospital as a laborer. Shortly thereafter, Don became a painter at the State Hospital, painting every part of the hospital, both inside and out; he was the only one who was brave enough to climb up to the top of the steeples to paint and repair them. Don worked at the State Hospital for 38 years.

Don spent many good days hunting, fishing, trapping, cutting wood and tending his gardens. In 1993, he retired from the State Hospital. That year Don was very proud of the many cords of wood that he cut. Don has harvested many deer, fox, beaver, mink, muskrats and raccoons. One time when checking his fox trap he instead found a dog caught in the trap. He released the dog, but to his surprise the dog followed him home and remained with him as a loyal companion. Don was always happy to share his garden vegetables with family and friends. Grandchildren and Great-grandchildren couldn't wait to eat the fresh raspberries! Fishing, however, was his favorite. Many a fish were caught and eaten from Long Lake, either fried, pickled or smoked. He was a legend on the lake!

Don loved life, he loved his "Doodley Doo" (fiddle, old time country) music, dancing, and visiting with family and friends. John Deer tractors were a favorite of his and he enjoyed sharing rides on his tractors and lawn mowers with his grandchildren and greatgrandchildren.

Don is survived by his wife of 63 years, Helen; his son, Steve (Sandy) Sundblad of Pelican Rapids, Randy (Linda) Sundblad of Savage and Sandy (James) Mann of Lonsdale; Grandchildren,  Tina (Brent) McKellips of Clarksville, Matthew Sundblad of Dilworth, Joshua, Austin, and Cameron Sundblad and Zachary Laven all from Savage, Rebecca Gray from Jordan, Mason and Dezriah Mann of Lonsdale and Jordan Mann from St Louis; Great Grandchildren, Mackenzie and Parker McKellips, and Tarin, Kindle, Ryder and Tatum Sundblad and a sister, Irene Melkert from Rothsay.

Don was preceded in death by his infant daughter, Vicki Lynn; his parents; infant great grandson, Carson, two brothers and two sisters in law; Raymond/Joyce Sundblad and Leonard/Jeanie Sundblad, and a brother in law, Buddy Melkert.

Blessed be the memory of Donald Gordon Sundblad

Funeral Services: 2:00 P.M, Thursday, July 19, 2018, at Grace Lutheran Church in Erhard, with a visitation two hour prior to the service at the church.

To order memorial trees or send flowers to the family in memory of Donald Sundblad, please visit our flower store.