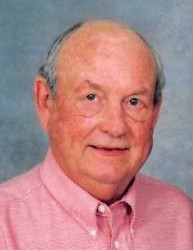 Dick “Homer” Herman Wegner was born June 22,1933 in Lamberton, Minnesota. His parents were Ervin Wegner and Martha (Dagner) Wegner. His older brother was La Grande Wegner. He was raised in New Ulm, Minnesota and graduated from high school there. As a young man he enjoyed fishing and hunting in the area. He liked and raised pigeons. He was also a basketball player in high school.

Dick left New Ulm and left for the lights of the big city of Minneapolis. While there he started his career at John Deere. He enjoyed going to dances at the Sons of Norway. In 1951, he was drafted and following his brothers’ example he drove straight to the Naval Recruiting Station and enlisted. He served in the US Navy for 4 years mostly on the USS Forrestal. After his service he went back to John Deere.

Dick was a lifetime member of the American Legion Post 550. He served as Post Commander and as 10th District Vice Commander and was a member of Voiture 1281 of the 40 & 8.

While home on leave he met his future wife Jean Boelter outside of a dance hall. They started writing letters back and forth. Grandpa Boelter was an old school German farmer and was not impressed that his daughter was dating an older (by four years) sailor. On February 9, 1957 on a blizzardy day Dick and Jean were married. The newlyweds moved to Fish Lake outside of Minneapolis. They lived in what was an old cabin on the lake. After having two children Thomas and Geraldine they moved to St Louis Park before their child Richard was born. Dick continued to work for John Deere in the warehouse. One day he was approached about a new position that had opened. That was as a Consumer Products Territory Manager. Dick was the first to have this job in the Minneapolis division. His territory grew to include Minnesota, the western half of Wisconsin, the UP of Michigan, the northern half of Iowa and the eastern halves of both North and South Dakota. He put a lot of miles on his company cars and was away from home for most of the week.

Dick was quite the outdoorsman. He was famous for driving the backroads to his dealers with his 12-gauge shotgun and / or fishing pole in the car. He was said to have business meetings in the field. He wasn’t a golfer. As his children grew he instilled his love of the outdoors in them. There was a family camper and the family would stay in state parks while he worked in the surrounding areas. His boys started going with at a young age and may be the reason he never had a hunting dog. The highlight of his hunting was in 1987 when he won the drawing for the Minnesota moose hunt. Their group of four was Homer, his wife Jean and Roger and Del Larson. He asked the local JD dealer about where to go hunting. Early on opening day he shot a 1050-pound bull moose on the edge of a barley field. The farmer whose land they were on heard the shots and came over with tractor (JD of course) with a bucket on it. This made it horribly hard to dress the beast. In fact, the farmer loaded it into the bucket drove to their hotel and dropped in the trailer for him.

He was offered early retirement at John Deere and retired after working there 34 ½ years at the ripe old age of 53. After retiring they sold their house in Apple Valley bought a house in Vining Minnesota and a little later bought a winter home in Mercedes Texas. They were winter Texans until this year. He was well known at local Wal Marts, HEBs and of course every flea market he could find. He enjoyed going to Nuevo Progresso across the bridge in Mexico and not just for Cuban cigars. A lot of Bingo presents came from there.

Homer was involved with Love of Christ Lutheran Church in Weslaco, Texas. He was also involved with Runn Elementary School in Donna, Texas. Many years ago, he helped deliver donated quilts by quilters from both Texas and Minnesota, to children from the school whose homes had no heat. With school Principal Ofelia Gaona guiding the way in the dark colonias. This eventually grew into having a 53 foot trailer from Minnesota filled with donated bikes and clothing being given away at the school.

Dick was very proud of his German heritage especially polka music and beer. He took great joy in brightening someone’s day by giving things to folks. It could be a hat, a pen with built in laser, a shirt or his favorite Demints from Mexico.

In Vining most people knew Dick as “Homer” the guy who drove around with a cigar in his mouth. He enjoyed cigars in his youth he smoked them later on he chewed them. He was very involved in Vining’s Watermelon Day. He served in many positions and could be seen driving around in a “official” JD Gator cigar in mouth of course. He sold lots of tickets and got many people involved to help that hadn’t helped  before. He was a regular at Bigfoot for morning coffee. He enjoyed shopping looking for deals in Wadena, Fergus Falls and Alexandria. He particularly enjoyed being part of the FUD fishing tournament on West Battle Lake even if he never won.

Dick passed away on October 11, 2018 in his sleep at The Good Samaritan Society in Battle Lake. It was a cold, cloudy and windy day. The ducks were flying low and the fish were biting as he left this world. It was a good day to die. He will be missed. The family would like to extend to the nurses, CNA’s and staff of The Good Samaritan Society of Battle Lake, Hospice, the VA Hospital in Fargo and the VA Clinic in Fergus Falls our most heartfelt thanks for the care Homer was given when he was with you.

Dick was preceded in death by his parents, older brother and his beloved daughter Gerri. He is survived by his wife of 61 years Jean, sons Thomas and Richard (Evelyn) Wegner, Grandchildren Samantha (Jarrod) Mize, Andrew Fritz of Dallas, TX, Josy (Sean) Virgen, Sarah (Connor) Haas, David Wegner and Richard Wegner as well as many friends, colleagues and fellow parishioners at Vining Lutheran Church and Love of Christ Lutheran Church.

Memorial Service: 2:00 P.M., Friday October 19, 2018, at Vining Lutheran Church, with a visitation one hour prior to the service at the church.

Funeral arrangements are with the Glende-Nilson Funeral Home of Battle Lake for Dick Wegner.

To order memorial trees or send flowers to the family in memory of Dick "Homer" Wegner, please visit our flower store.