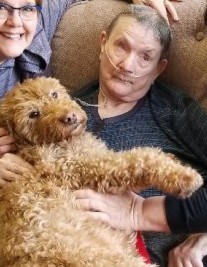 David spent many years in Elbow Lake, and it was his favorite place. While in Elbow Lake, David worked at the DAC in Hoffman, MN. He was very proud of his accomplishments there.

David lost his eyesight at an early age but not before he could visually see the wonders of God’s creation, the sun, moon trees and colorful flowers. After David’s total blindness his vision did not end, it moved to his ears and oh how could he see with those ears! Blue sky and spring blossoms were typical words to expect.

David enjoyed conversation but at times he would control the subject matter. Most of us have heard David say, “I do not want to talk about it”. Some of us have taken that statement home with us and added it to our vocabulary. Most of us that spent some time with David would come out of it receiving more than giving.

He is survived by his brothers, Richard (Beverly) Field and Eugene (Linda) Field both of Fergus Falls; a sister, Marlene Thompson of Springfield, Missouri; a brother-in-law, Robert Ledbetter of Xenia, OH; in addition to numerous cousins, nieces and nephews.

He was preceded in death by his parents, Vivian and Fern; a sister, Arlene Ledbetter and brother-in-law, Doug Thompson.

We miss you David and look forward to our meeting again in the promised land. Blessed be the memory of David Field.

A Celebration of David's Life will take place at 11 AM Saturday, July 18, 2020, at Glende-Nilson Funeral Home, Fergus Falls, with visitation one hour prior to services.

To plant a beautiful memorial tree in memory of David A Field, please visit our Tree Store.

To order memorial trees or send flowers to the family in memory of David Field, please visit our flower store.