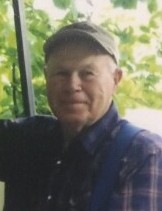 Darel Elmon Runningen was born on August 10, 1933 to Clifford and Eunice (Torgrimson) Runningen in their home near Ashby, Minnesota. He was baptized and confirmed in Grue Lutheran Church. Darel attended Country School District #114, through the eighth grade.

Darel and Beverly Rindahl were married on March 8, 1953, in Grue Lutheran Church. They started their lives together and began raising their children on a farm in Eagle Lake Township. In 1969 they purchased land and moved the family to a farm in Nidaros Township where they lived until 1998, when they moved to their home south of Battle Lake. Darel was an avid dairy and grain farmer, he was employed by Dieseth Specialty Co. for ten (10) years working on the interstate highways, and Millerville Coop Creamery as a semi truck driver for nineteen (19) years. Upon retiring from the Millerville Coop Creamery, Darel received an honorary plaque for driving over a million miles accident free. He then returned to work on his beloved farm. Darel had a passion for collecting tractors, driving cars, and music. He also enjoyed hunting deer and ducks. Darel and Beverly enjoyed many camping trips and traveling together. Their travels took them all around the United States and exceeded the state borders to Norway, and he particularly enjoyed a Halibut fishing trip in Alaska.

A private family service will be held and for the health and safety of our friends and family, a larger Celebration of Life for Darel Runningen will be planned for a later date.

To order memorial trees or send flowers to the family in memory of Darel Runningen, please visit our flower store.