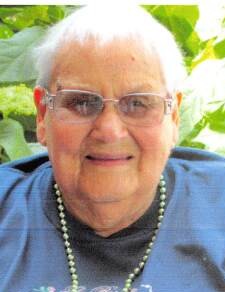 Clarice J. Alfredson, 97, of Battle Lake, passed away peacefully in her sleep at the Good Samaritan Nursing home in Battle Lake on January 2, 2021.

A graveside service will be Friday, January 8, 2021 at 1:00pm at the First Lutheran Cemetery of Battle Lake. Glende-Nilson Funeral Home of Battle Lake is assisting the family. www.GlendeNilson.com

On September 20, 1947, she was united in marriage to Emmett Alfredson. She soon gave birth to Shirley Ann and Alan Vernon.

During her life, she worked at various jobs but her main occupation in life was being the care taker of her family.

She enjoyed entertaining during the holidays for her family, grouse hunting, fishing and was well known for her love of soap operas, especially Days Of Our Lives.

Clarice was preceded in death by her parents; husband, Emmett; brother, Howard Hanson; uncle, Edwin and numerous other family members.

To order memorial trees or send flowers to the family in memory of Clarice Alfredson, please visit our flower store.