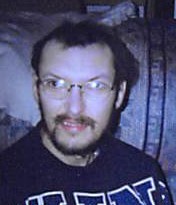 God called home a special angel, reaching out His hand and welcoming Christopher Allen Morrissette back on Saturday, July 18, 2020 at Sanford Hospital, Fargo, after a re-occurring bout with pneumonia.

Christopher was born November 16, 1971, in Minneapolis, to Kenneth and Lucille (Fechtner) Morrissette.  He attended St. Louis Park High School and graduated in 1993.  Though facing challenges was nothing new for Christopher, he took his disability and turned it into abilities.  He had the ability to make new friends, love his life and co-workers at the Grant County Recycling Center in Hoffman and give love to all the animals at the Grant County Humane Society in Elbow Lake. There he served as an ambassador for their work and volunteered to care for their animals.  He even had his own cat, Spunky, that was his pride and joy.

Christopher was a Special Olympian and competed in bowling, roller skating, and track.  He was gifted in being able to dance while on roller skates, something he loved greatly.  He was often seen out speed walking in his neighborhood.

He is warmly welcomed into heaven, by his grandparents, his father, Kenneth Morrissette; step-father, Steven Gaustad; aunt, Janice Blencoe; and uncle, William, Nerison.

No services for Christopher are planned.

To order memorial trees or send flowers to the family in memory of Christopher Morrissette, please visit our flower store.

No services to be held