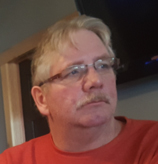 Charles Louis Terwey was born on March 3, 1961, in St. Cloud, Minnesota the son of Louis and Rosella (Kron) Terwey.  He was a member of the St. Joseph Catholic Church, attended St. Joseph Lab School and graduated from St. Cloud Apollo High School in 1979.


Charles and Anne Behl were married on December 31, 1997, in the Chapel of Love at the Mall of America in Bloomington, Minnesota.  After their marriage they lived in Brooklyn Park.  Charlie worked construction and in 2003, they moved to Battle Lake where he operated his own construction business.  He enjoyed woodcarving, cooking, boating, fishing and he loved heckling his nieces and nephews.


To plant a beautiful memorial tree in memory of Charles Terwey, please visit our Tree Store.

To order memorial trees or send flowers to the family in memory of Charles Terwey, please visit our flower store.