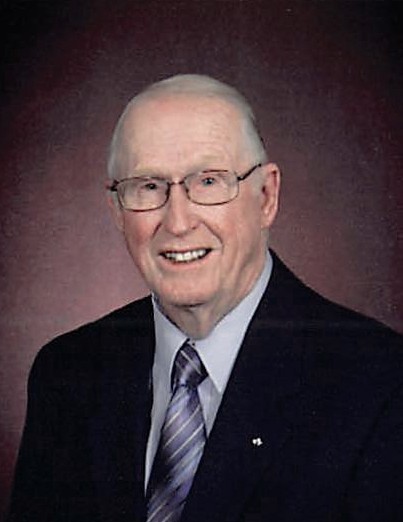 Charles August Lindstrom was born on July 22, 1929 to August and Esther Lindstrom on their farm in Lake Park, MN. In 1951 he married Louise Halliday and they were blessed with four children, Karen, Curt, Connie and Kaye. He passed away at the home he built on Swan Lake, rural Fergus Falls, under the care of his family and Knute Nelson Hospice.

He graduated from Lake Park High School in 1946, and attended college at Moorhead State until 1950. In 1951 he enlisted in the U.S. Air Force. He served in Texas, Kansas, Washington and The Far East (stationed in Guam) during the Korean War until 1955 and then served in the AF Reserves until 1959. He farmed at Lake Park until 1963 and then entered the insurance business working for Farm Bureau. The family moved to Fergus Falls in 1967 where he continued working with Farm Bureau Insurance until 1978 when he started his own agency, which became a partnership, Lindstrom Rohde Agency, with Mike Rohde. Charles retired in 1991.

He was an avid athlete and sportsman. He played football, basketball and baseball, even playing baseball while in the Air Force which took him to a tournament in Japan. He was an avid fan of high school sports and rarely missed any home varsity games. He loved to hunt, fish and play golf.

He was a life member of both the American Legion and VFW and served on the Legion Color Guard for many years. He was a Master Mason, member of the Order of Eastern Star, the El Zagal Shrine and Birak Shrine Club. He was an active member of Augustana Lutheran Church.

He was preceded in death by his parents, August and Esther; wife, Louise; and sister Doris Sahlberg.

A visitation will be held Saturday, January 22, 2022 at 1:00 P.M at the Augustana Lutheran Church in Fergus Falls with a prayer service to follow.

Date for burial is to be determined at Eksjo Lutheran Cemetery in Lake Park, Minnesota.

To order memorial trees or send flowers to the family in memory of Charles Lindstrom, please visit our flower store.