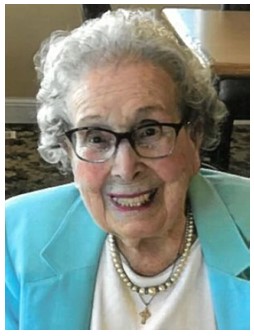 Catherine (Kitty) B. Loeffler passed on November 18, 2021 due to Covid-19 and pneumonia. She was born June, 1919 in St. John’s, Newfoundland, Canada to Thomas and Mary Kearsey. She was the sixth of seven children and graduated from High School in 1936. When WWII began, American soldiers were trained in St. John’s in preparation for the invasion of Europe. She married Lawrence Lundgren, an American soldier from Vining, MN. Before he was sent overseas, he suggested that she should live with his family. The marriage didn’t last, and she moved to Fergus Falls, MN with her daughter.

She worked at Montgomery Wards and then O’Meara’s Department Store where she was also a buyer. She married Earl (Sparky) Otnes, and they had many happy years with their double decker raft on Long Lake and dances at Sunblad’s Resort with Sparky’s musical friends. They also built a cabin there. After Sparky’s death in 1962 she moved to Minneapolis and took a job with security at Dayton’s Department Store. Her grandchildren enjoyed hearing stories about her catching shop lifters. She worked hard all her life and made sure her family had everything they needed and then some. Kitty took many trips visiting her siblings in St. John’s, Ottawa, and Montreal. Hawaii was a favorite place in the winter, and she also traveled to several countries in Europe.

The family would like to thank the staff of Keystone Bluffs for their outstanding care.

Memorials are preferred to Animal Allies or the Humane Society.

Funeral to be held 11 AM Saturday, August 20, 2022 at Glende-Nilson Funeral Home with a visitation a half hour prior.

Arrangements by Glende-Nilson Funeral Home and the Cremation Society of Minnesota Duluth.

To order memorial trees or send flowers to the family in memory of Catherine Loeffler, please visit our flower store.