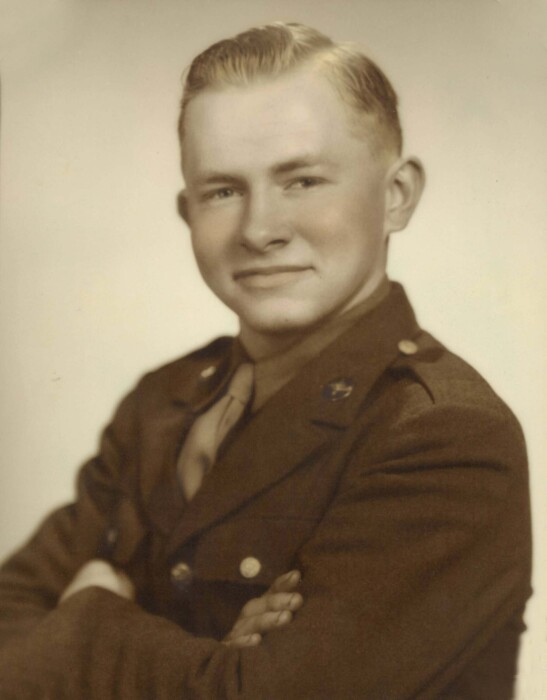 Byron Osander was born July 4, 1927 to Peder and Lillian (Larson) Osander on a farmstead on (Turtle Lake) near Underwood, Minnesota.  His family life was centered on hard work, music, love for nature and Norwegian traditions.  He had a passion for aviation, electrical engineering and music.   Shortly after his high school graduation, he enlisted in the service at the age of 17.  He needed his mother’s permission to enlist and it broke her heart to do it but she did it as Byron wanted to serve his country. The summer of 1945 he left for Leavenworth, Kansas for boot camp and then served in the Air Force/316 Bomb Wing from 1945 to 1947 in Japan.  He was as part of the 8th Air Force in Okinawa, Japan.  Byron said his proudest moment in the service was landing on the runway in Okinawa.  In his letters he wrote home to his mother he said he missed the snow, lakes and her Norwegian cooking such as potato Klub and lefse. He also missed autumn on the farm with the sounds of the ducks, redwing blackbird migration and the color changes of the of the oak and maple trees. He always thought he grew up in a piece of heaven.  In the fall of 2016, he went on the WDAY Honor Flight to Washington, D.C. to visit the WWII Memorial.  He was extremely grateful for this trip.

After he returned home from the WWII, he married Katherine Benbow. They had four children: Keith, Steven, Karen and Scott. Katherine and Byron divorced in 1963. He continued to reside in Watertown, SD where he worked in a music store and also gave music lessons.  His accordion abilities were top notch and he traveled around the country performing in stage shows.  He even played with Myron Floren who gained fame on the Lawrence Welk Show.

Byron met Phyllis Schmidt and her family which had the traveling Schmidt Family Circus with trained elephants and family acts. Byron provided the musical background for all of the circus acts. Byron and Phyllis moved to a farmstead near Dalton, MN where he was most happy as it was near where he grew up near Turtle Lake.  In 1965, Phyllis and Byron married, they welcomed their daughter in 1966. Jolene was the joy of his life and he adored her. He provided a home filled with music, laughter and love.  Byron instilled in Jolene a love for music and singing. He loved to listen to her sing and perform.  Byron and Phyllis performed the famous Whip Act where he would hold a piece of paper between his lips and Phyllis would cut the paper with a bull whip.  In the early 1980’s, the circus turned into a traveling carnival. He loved to run the Merry-Go-Round because it was the most beautiful ride on the midway and children loved to ride it with its happy music.  Byron could figure out any mechanical problem, electrical issue, build and always had time to enjoy a cup of coffee with a friend.  He loved nature and woods around the Dalton farmstead where he spent hours cutting wood for their wood burning kitchen stove and shop stove.  He enjoyed the winter months repairing the carnival rides and took care of the mini ponies and elephants.

On August 7, 2020, Byron passed away at Broen Home in Fergus Falls, Minnesota at the age of ninety-three.

Byron will be missed by his family who enjoyed his moments of laughter, stories and never-ending smile. We know that he will rest in peace and now is reunited with his beloved wife Phyllis.

To plant a beautiful memorial tree in memory of Byron Osander, please visit our Tree Store.

To order memorial trees or send flowers to the family in memory of Byron Osander, please visit our flower store.