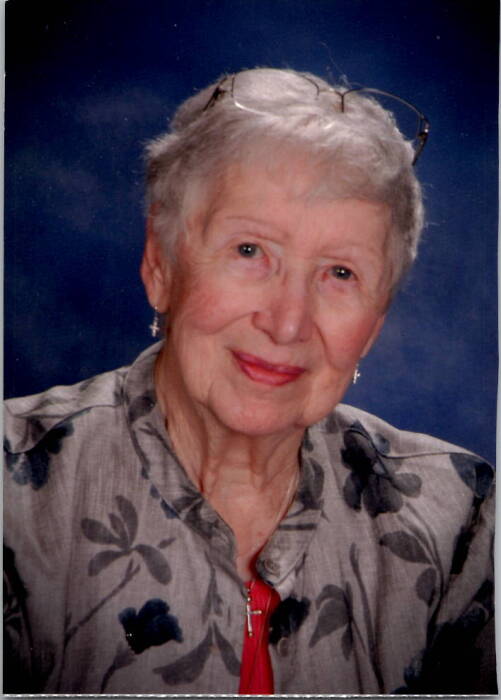 Beverley (Bev) Mansfield was born on February 23, 1928 in Dowagiac, Michigan, to Lyle Swisher and Beatrice (Newton) Jones.  In 1941, she and her mother moved to Lansing, Michigan, where she graduated from J. W. Sexton High School in 1946.  Bev went on to attend Michigan State University where she met (Ezra) Marvin Mansfield.  They were married June 18, 1949 in Lansing.  Following Marv's graduation in 1950, they moved to Waverly and then Chillicothe, Ohio where Marv was employed by the Ohio Division of Wildlife.

In August, 1951 Marv joined the U.S. Air Force and they moved to Denver, Colorado and then to Spokane, Washington where their son, Doug was born in 1954.  After his discharge in 1955, they moved back to Delaware, Ohio where their second son, Dick, joined the family.  They then returned to Chillicothe and were there until 1959 when Marv began work with the U.S. Fish and Wildlife Service and moved to Agassiz National Wildlife Refuge near Thief River Falls, Minnesota.  In 1961, they were transferred to J. Clark Salyer Refuge near Upham, North Dakota where their third son, David, joined the family.  Then it was on to Slade Refuge near Dawson, North Dakota, where their fourth son, Darin was born in 1964.  In 1971, they moved to Fergus Falls where Marv managed the Wetland Management Office until his retirement in September of 1982.

During all these moves, Bev worked in a number of banks and was a secretary at the Chillicothe Gazette and the Fergus Falls Middle School until she established "Bev's Poodle Parlor" in 1976.  She continued to work as a dog groomer for 20 years, organized a Groomer's group in this area, and was named the Minnesota Groomer of the Year in 1991.

Bev was a member of Grace United Methodist Church.  Her commitment to Christ was the most important part of her life.  She took an active role in every Church they attended, was on the board of Christian Women's Club, and was president of Women's Aglow.  God gave Bev the analogy that He is in the business of grooming us, which she eventually turned into a book.  She gave many talks on this analogy, as well as leading bible studies at Grace Church.  Bev was also an intercessor and fierce prayer warrior.  She started and led a prayer group at the MN Veteran's Home, where Marv lived from 2010-2015, and has continued to volunteer there.

Her hobbies included knitting, reading, writing, listening to music and traveling.  Bev's favorite trips were to Germany in 1986, where Doug was serving in the Army, to Israel in 2003, multiple cruises to Alaska and Hawaii.  She considered dogs some of her best friends, and especially enjoyed the time she spent with her family.

On Friday, July 8, 2022, Bev went to be with the Lord, at Minnesota Veteran's Home, Fergus Falls, Minnesota, at the age of ninety-four years.

Preceding her in death were her parents and husband, Marv, in 2015.

To order memorial trees or send flowers to the family in memory of Beverley Mansfield, please visit our flower store.