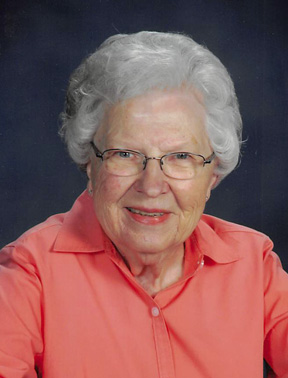 Bernice Carolyn Melby was born on April 8, 1921, on a farm by Echo, Minnesota, the daughter of Edward and Birgitta (Germundson) Sebey.  She was baptized and confirmed in the Lutheran Faith.  Bernice attended country school, then graduated from the Breckenridge High School in 1939, and then furthered her education with the Minneapolis Business College.  After her schooling she was employed with the Minneapolis Gas Company.

Bernice and Harrison Melby were married on February 8, 1944, in Reno, Nevada, and following Mel’s military discharge they lived in Fergus Falls.  They had the Corner Store on Otter Tail Lake.  In 1950, they moved to Norwalk, California where they lived until 1962, when the family returned to Minnesota and built Mel’s Market on Otter Tail Lake.  Bernice was also a Secretary for Otter Tail Power Company until her retirement.  They sold Mel’s Market in 1986, and in 1993, moved to their home in Battle Lake.  She enjoyed crossword puzzles, painting, cross stitching, and quilting with the Zion Church ladies.  Bernice was a member of the Zion Lutheran Church of Amor.

There will be a graveside service in the spring at the Zion Amor Cemetery of rural Battle Lake.

To order memorial trees or send flowers to the family in memory of Bernice Melby, please visit our flower store.