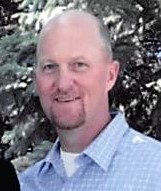 Benjamin Henry was born on October 18, 1974, in Crookston, MN, the son of Terrence John and Claudette Rene (Jore) Erholtz. He was baptized at Trinity Lutheran in McIntosh, MN and confirmed at Littlefork Lutheran in Littlefork, MN. Ben attended Littlefork-Big Falls High School graduating in 1993. He went on to attend Ely Junior College, Rainy River Junior College and U of M Morris. While in High School and College he participated in Football, Hockey and Baseball.

In 2001, he married Mary Lyn Schmidgall in Poipu, Kauaʻi County, Hawaii. To this union came two children, Alexa and Trace. Benjamin worked at McNally Construction and Riverview Farms where he worked as a construction project manager. Most recently he worked at Riley Brothers Construction. Benjamin was a member of the Morris Evangelical Free Church. His hobbies included hunting and fishing. His favorite place was Lake of the Woods where he recently caught a 40-inch Northern pike on his 40th Birthday. He enjoyed going to his children’s sporting events and extra-curricular activities. He also cherished the time spent pulling Alexa and Trace tubing and skiing or throwing them into the lake.

He is preceded in death by his maternal and paternal grandparents. Ben is survived by his parents, Terrence and Claudette Erholtz of Moorhead; two children, Alexa and Trace; three siblings, Tim (Teresa) Erholtz of Moorhead, Mark Erholtz of Williams, MN and Matt (Brandy) Erholtz of Hayden, CO along with numerous nieces, nephews, cousins and a host of friends.

A Memorial Service will be planned at a later date for Benjamin due to Covid restrictions.

Benjamins cremains will be interred at the New Sweden Cemetery in McIntosh, Minnesota.

Funeral arrangements are with the Glende-Nilson Funeral Home of Fergus Falls for Benjamin Erholtz.

To plant a beautiful memorial tree in memory of Benjamin Erholtz, please visit our Tree Store.

To order memorial trees or send flowers to the family in memory of Benjamin Erholtz, please visit our flower store.