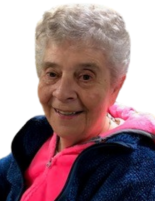 Barbara Anne (Satovich) Beyer, 80, of Fergus Falls reached for her daughters Amy and Lisa’s hands to be united with Jesus in their heavenly home on Thursday, September 23, 2021 at Pioneer Heartland Cottage. She was deeply loved by all who took care of her along with hospice.

Barb was born on October 18, 1940 in Hibbing, Minnesota to Frank and Anne (Yelenich) Satovich. She was baptized and confirmed at St. Leo’s Catholic Church. Barb graduated from Hibbing High School in 1957. She attended Hibbing Junior College from 1957-1959, and NDSU in Fargo, North Dakota from 1959-1961, graduating with a major in-home economics and a minor in physical education.

On August 25, 1962, she married her lifelong soulmate Paul H. Beyer. Barb began her teaching career in 1961 as a Home Economics teacher in Clinton, Minnesota. When Barb and Paul started their family, they began their dedicated partnership in raising their five children: Mike, Lynn, Lisa and twins Amy & Anne. Also, during that time, they began their partnership as business owners of the Ford Dealership in Ortonville, Minnesota from 1962-1965. In 1965, they started their own business, Beyer Body Shop and Towing in Benson, Minnesota. In 1976 they moved Beyer Body Shop and Towing to Fergus Falls, Minnesota; retiring in 2017 when their son Mike took over.

Barb enjoyed living the lake life at the log cabin her and Paul built on Silver Lake in 1978, to building their home on West Battle Lake in 1995. They also enjoyed their “Deer Farm” where their children, grandchildren and great-grandchildren all learned their love of deer hunting, countless hours fishing year-round, four-wheeling, snowmobiling and all things related to the outdoors. This has become one of their greatest joys in life, as they have lovingly nurtured a family legacy with and for their family for generations to come.

Besides all activities of her children, grandchildren and great-grandchildren over the years, one of Barb’s favorite activities was following the Minnesota Twins Baseball team. Barb and Paul attended the Twins Spring Training games in Fort Myers, Florida for 33 consecutive years. The last game they attended was in March of 2020, the day before the NLB shut down, due to the COVID-19 pandemic. Many friendships from all over the USA were formed at spring training over the years. The deepest bond of friendship was formed at the Hilton Homewood Suites in Fort Myers with fellow baseball fans from Minnesota, Boston, Virginia and New York who became “family”.

Memorials preferred to the Alzheimer’s Association and Hospice.

Mass of Christian Burial: 10:30 AM Saturday, October 2 at Our Lady Of Victory Catholic Church, Fergus Falls

Visitation: 4-7 PM Friday at Glende-Nilson Funeral Home, Fergus Falls with a prayer service at 6:30 and one hour prior to the service at the church.

Cemetery: Our Lady of The Lake Cemetery, Battle Lake

To order memorial trees or send flowers to the family in memory of Barb Beyer, please visit our flower store.