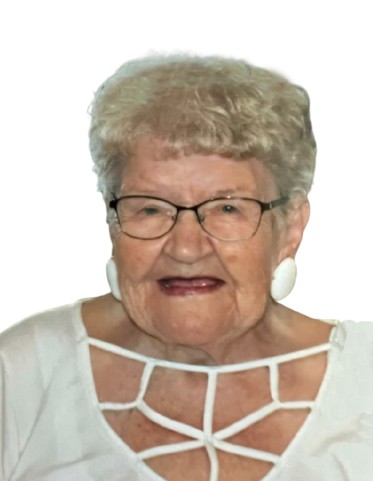 Arlene Karoline (Botner) Lauf passed away peacefully on Tuesday, December 15, 2021 in her home at the Good Samaritan Nursing Facility in Battle Lake, Minnesota, with her family by her side, under the care and support of Hospice. A Celebration of Arlene’s Life will be held at Glende-Nilson Funeral Home in Battle Lake on Tuesday, December 21 at 1:30 PM with visitation one hour prior to the service.

Arlene Karoline was born to Albert and Myrtle Botner in Benson Corner, ND on August 31, 1929. She was baptized and confirmed at High Prairie Lutheran Church. She graduated from LaMoure High School, after which she taught school in a one room schoolhouse in her hometown of Benson Corner. Arlene married Donald L. Lauf on August 17, 1952 at High Prairie Lutheran Church. The two were married for 57 wonderful years, bringing into the world six beautiful children: Bobbie, Ardona “Donnie”, Jeri, Greg, Rodney, and Mari Pat.

When her youngest went off to kindergarten, Arlene began her career as an Administrative Assistant in the Fargo Public Schools network. She transferred her talents to the Bismarck Public Schools network, where she and her family lived for several years. Her life was deeply fulfilled by all of the children and staff that she came to know and love during her years in the Public Schools systems. In 1998, she and Don moved to Ulen, MN where she focused on being a grandmother. She spent her days attending various school events that her grandchildren took part in.

Arlene was known for her kindness, compassion, humor; her love of games, and her fierce love for her family. Arlene loved to cook, her favorite dishes being her famous fried chicken and potato salad that she would make for family gatherings. She was an avid card player, pinochle and whist being two of her favorite card games. A dedicated sports fan, Arlene rarely missed an opportunity to watch and cheer for her grandchildren who played football, basketball, softball, and volleyball, as well as the Minnesota Vikings and the North Dakota State University Bison football team.

Arlene is survived by five of her children, her 16 grandchildren, 30 great-grandchildren, 1 ½ great-great-grandchildren, as well as many nieces and nephews. Arlene was preceded in death by her husband, Don; her daughter, Donnie; son-in-law, Dave Grafsgaard; grandson, Chris Lauf and her parents. The family would like to acknowledge and thank the staff at the Good Samaritan Nursing Facility in Battle Lake, MN, for taking such wonderful care of Arlene. They are a very loving and compassionate group who made our mom feel special and very much at home.

To order memorial trees or send flowers to the family in memory of Arlene Lauf, please visit our flower store.