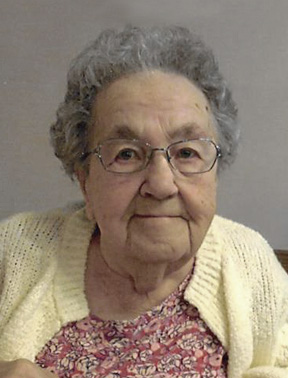 Delores Mae Lange was born July 11, 1923, at her parents’ farm in Star Lake Township.  She was the daughter of Michael Lange and Helen Herman Lange.

She grew up the youngest of 11 children with two older half-sisters.  She attended Zorn School, District 137, until eighth grade and then went to Pelican Rapids High School through tenth grade when her mother broke her leg and Delores was needed at home.

She lived on the farm in Star Lake Township with her mother and brother Herman Lange who ran the farm.  Delores loved working with Herman on the farm, especially cultivating and working with the team of horses and doing the farm work.  She preferred outdoor farm work to helping in the house.

The Lange family all were very musical with all 11 children playing one or more instruments.  Delores played ragtime piano from a young girl.  She and her brothers would play at the Boathouse on Star Lake and other places.  She played by ear and loved playing.  She also later played the accordion.

During World War II Delores worked in Moorhead at the Fairmont Creamery where she broke eggs for the making of war rations for the soldiers.  She worked with her friend Alice Western and they shared an apartment in Moorhead.

After the war, she returned to the farm in Star Lake and lived with her mother and brother, Herman.  After World War II Irvin Voigt would come to the farm to hunt with her brother Maynard.  There he met Delores, they dated and on June 7, 1947, they were married.  They were married in Fergus Falls at the parsonage of the Rev. Bill Van Dyken.

Delores and Irvin traveled five weeks throughout the U. S. on their honeymoon.  Irvin said Delores had never been far from the farm, so he wanted to show her the country.

They settled down on a little farm outside of Dent.  Irvin worked as a mechanic at the Dent Oil Station.  They had three children, Thomas Allen, Sharon Ann, and Richard Irvin Voigt.  In 1954 they moved into town.

After the children were grown, Delores worked at the DAC in Dent for 14 years, working with special needs adults.  She was in charge of the music and enjoyed using her musical ability to bring joy to the clients who attended the DAC.

Delores enjoyed being with people.  She said, “When I was at home there was always a house full of people.”

Irvin later worked for Edling Electric in Moorhead, but they continued to live in Dent.

Delores loved baseball, especially watching her brothers and sons play in the Dent area.  Later she became an avid Minnesota Twins fan.  She also loved playing cards with her relatives.

On Nov. 10, 1984, Irvin died, and Delores continued to live in Dent until 1995.  She then moved to Fergus Falls and lived there until her death.

Visitation will be at Glende-Nilson Funeral Home in Fergus Falls on Friday, Dec. 7 from 5 to 7 p.m.  and the funeral is 2 p.m. on Saturday, Dec. 8, at the funeral home.

Delores will be laid to rest at Pleasant Hill Cemetery in Dent.

For those wishing to give a memorial, please donate to the charity of your choice.

To order memorial trees or send flowers to the family in memory of Delores Voigt, please visit our flower store.